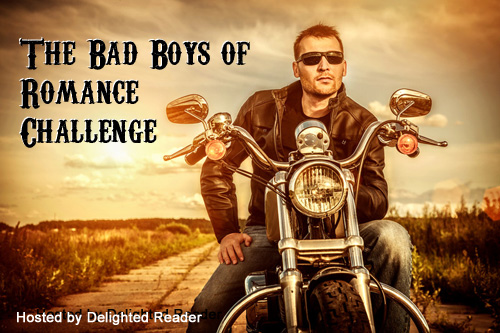 Time for an update! To see reviews of the books I’ve already read, go check out the posts on Reading Challenge 2017 or Countess Here I Come.

To sign up for the Bad Boys of Romance Challenge yourself (there’s still time!) go here to Delighted Reader’s blog. The minimum number they ask for is five books and you can get through five books by November 30th, right? Of course you can, my fellow bibliophiles. Rock on.

We’ve already established that I have this socially unacceptable love for Bad Boys in romance, the Damaged with a Heart of Gold character, Redemption as a trope, and hot sex in my books. So this challenge has been a blast, because I’ve read books that have all of those yummy things, plus some lovely witty dialogue.

The best part? Finding author Kylie Scott. She writes nothing but Bad Boys, she’s hilarious, and I love her books. In the last update I wondered how to go about borrowing her Stage Dive series and whether or not my local library even contains such naughty books. Turns out they do and they didn’t even blink when I wanted them to order the rest of the series. This leads me to believe that a) there’s more of a market for erotica in this city full of elderly retirees than I thought or b) librarians don’t judge.

Skin by Kylie Scott. (New read.) The second in the zombie apocalypse series. In this brave new society Nick wants a woman. He bargains for Rosalyn (with a van full of canned goods, no less!) She refuses to accept the new social order, but she’s still attracted to Nick. Much shouting ensues. I thought Rosalyn edged into Too Dumb To Live territory a few times, and got frustrated with her. She’s walking the line between self-respect and staying alive and she edges into doing stupid things just to prove a point (which will get her killed) several times. Uggh, Rosalyn. Heat level: Medium.

Lick by Kylie Scott. (New read.) Stage Dive series #1. A twist on the Marriage of Convenience trope, with a One Night Stand element. Evelyn wakes up after a bender of a night in Vegas with a new husband, who happens to be the lead guitarist of a huge band. When the haze of alcohol clears, she’s not even sure she really loves him. David thought he had found someone who saw beneath the rock star to the man underneath, and jumped into love full of hope. Heat level: Sweet and Spicy.

Play by Kylie Scott. (New Read.) Stage Dive series #2. Fake Relationship trope. Mal needs a Good Girl for a while, and Anne needs her rent money before she’s evicted. “Pretend” girlfriend doesn’t last long with the extreme heat they’ve got going on between them. First romance in a while that I had to put the book down because I was laughing so hard, Mal is hilarious and Anne adores his crazy. Heat level: Scorching  with the occasional snort of laughter.

Lead  by Kylie Scott. (New Read.) Stage Dive series #3. OMG you guys. OMG. Enemies to Lovers/Redemption AND Damaged with a Heart of Gold, all in one. This one was absolutely my favorite. Lead singer Jimmy has hit bottom and just come out of rehab. Lena is his assistant and sobriety companion and she’s one of the few people who can keep him on the straight and narrow. She’s desperate to keep her growing feelings professional, and he’s truly certain he doesn’t deserve love. Heat level: Holy Ice Cold Showers Batman.

Deep by Kylie Scott. (New Read.) Stage Dive series #4. Sort of a Redeemed Rogue/Accidental Pregnancy plotline, where the Rogue acts like a total douche about it and requires not one but SEVERAL come to Jesus talks. Unexpected pregnancy throws Lizzie and the womanizing, bachelor-for-life Ben together. I have to admit this one was a miss for me, mostly because of Ben. I was honestly doubtful whether or not he would ever man up and support Lizzie and the baby. So well done there Ms. Scott for throwing a genuine obstacle in front of the lead characters. Heat level: Sweet and Spicy.

© S.E. White and sewhitebooks.wordpress.com, [2016-2018]. Unauthorized use and/or duplication of this material without express permission is prohibited.  Excerpts and links may be used, provided that full and clear credit is given to sewhitebooks with appropriate and specific direction to the original content.